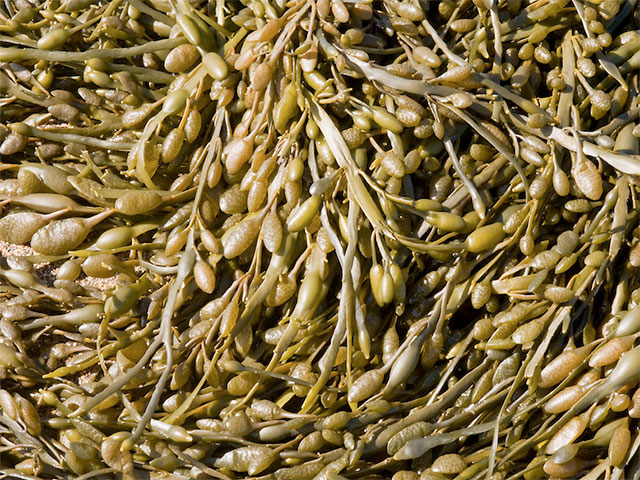 What is Bladder Wrack?

Bladderwrack, scientifically known as f. vesiculosus, is a form of brown seaweed native to the Baltic and North seas, as well as the Pacific and Atlantic Oceans. This form of seaweed is found commonly in Britain, where it was discovered by scientists in 1811 as the first source of iodine. Unlike other forms of brown seaweed that commonly have fucoidan, bladder wrack is not eaten in meals the way many East Asian seaweeds are.

Bladderwrack seaweed gained in popularity in the past because of its iodine content. It was often used as a treatment for goiter (a swelling of the throat, caused by an over- or under-active thyroid gland).

Bladderwrack seaweed has a few problems to be aware of. It has high levels of iodine.

Bladderwrack also is known to have bromine in it. Bromine, while naturally occurring in this form of seaweed, is a harsh chemical that is commonly used as a flame retardant, a pesticide, and as a substitute for chlorine when cleaning pools.

While bladderwrack does have nutritional benefits, it is not as effective as other options. For a balanced choice of seaweed that has beneficial qualities of Fucoidan on health, look no further than wakame seaweed.  There are 600 studies published on the National Library of Medicine’s database on the nutritional benefits of Undaria pinnatifida (wakame) as a source of Fucoidan. We standardize our Fucoidan from 400 mg of 100% Organic Undaria pinnatifida (wakame) seaweed to ensure maximum potency.