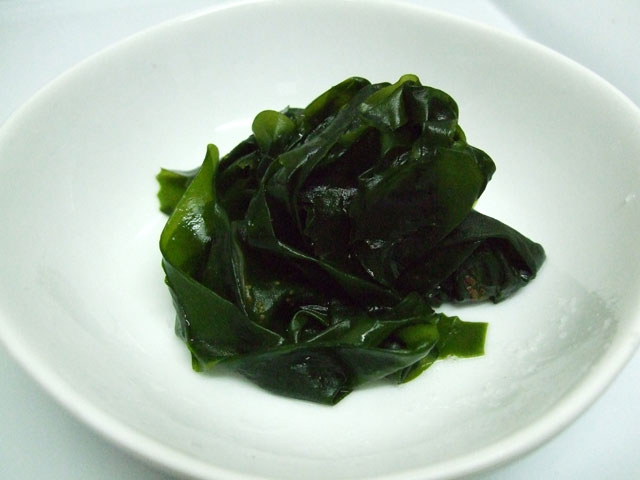 Saccharina japonica is an edible seaweed formerly known as laminaria japonica. It is also known as dasima, haidai, and most commonly, kombu. Like many species of seaweed, kombu has been part of Chinese, Japanese, and Korean diets for hundreds of years. In modern times, this common seaweed is dried, pickled, and shredded to be used in many noodle, sushi, soup, and rice dishes. Despite its common use, there is a health risk associated with this type of seaweed.

Today, kombu is harvested on a massive scale in Japan by simply attaching the seaweed to ropes and letting the ropes float at sea. Since it is used so commonly in so many Chinese and Japanese dishes, it is the most heavily produced form of seaweed on the market. This seaweed is also known to inhabit oceans and seas near Russia, Australia, Tasmania, Scandinavia, and even as far as Canada, though it is not nearly as popular as it is in Japan and East Asia. Kombucha (which means “seaweed tea”) can be made from powdered kombu. This is not to be confused with another form of fermented sweet-tea made popular in Russia, which English-speakers often call kombucha.

This form of Fucoidan is the most commonly consumed,  most commonly produced, and most commonly used source for Fucoidan. This does not mean, however, that it is the best source of Fucoidan. In fact, there are some health risks associated with kombu-derived Fucoidan that consumers should be aware of before they choose their Fucoidan source.

Kombu contains more than twice the amount of iodine compared to other commonly consumed seaweeds. Sometimes high iodine can have harmful effects for people who are not used to regular iodine consumption. Because people from East Asian societies are raised with and accustomed to having such a constant amount of dietary iodine, they generally do not have issues with an iodine-rich diet. People that are unaccustomed to a high-iodine diet should talk with their doctor before making changes to diet, medication, or supplements.

Since nearly 90% of all kombu is cultivated in the Pacific Ocean (usually off of the shores of Japan and China), consumers must be aware of the risk they are taking by choosing this source of Fucoidan. The Pacific Ocean has been contaminated by radioactive leaks from the Japanese Fukushima nuclear reactor that was compromised by the March 2011 tsunami; these leaks are known to have continued until September 2013, and there has not yet been a full repair to the reactor’s leak. With this in mind, it is not advisable to take Pacific Ocean-derived Fucoidan products, as they could contain radioactive compounds.

Wakame harvested from the Atlantic Ocean is the only source of seaweed that is guaranteed free from radiation contamination.  Fucoidan Force™  is standardized from 400 mg of 100% Organic Undaria pinnatifida (wakame) seaweed that is hand-harvested from the Atlantic Ocean, far from the radiation contamination leaked from the Fukushima nuclear disaster in the Pacific. Fucoidan obtained from Undaria pinnatifida wakame species is the most-studied and most renowned for its nutritional benefit.