Umi No Shizuku Fucoidan is among the top three most expensive fucoidan products available. And with the mainstream use of fucoidan becoming increasingly popular it is easy to get confused about which fucoidan is right for you.

One important decision is whether to use a product that offers a whole extract or an extract that is quantitively standardized for fucoidan.

The biggest problem with using an extract that is not quantitively standardized for fucoidan is that you will never know how much fucoidan you’re getting, even if you are an expert. Therefore, it is best to know the facts about the difference between the two so that you can make an informed decision.

How Much Fucoidan Are You Truly Getting?

When an extract is quantitively standardized for fucoidan, it is easy to know how much fucoidan you’re getting. Otherwise, you have absolutely No idea.

With this information and the fucoidan standing by itself, you can quickly figure out Y (the amount of fucoidan per serving) as follows:

However, as you can see below trying to figure out the amount of fucoidan in each serving of Umi No Shizuku Fucoidan it a total impossibility because looking at their Supplement Facts panel, you’ll see: 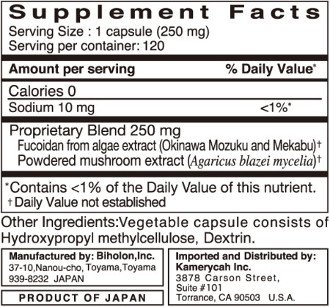 As you can see, this information is not only weak and sketchy but woefully inadequate as you can neither tell how much fucoidan or powdered mushroom extract you’re getting.

Based on the information provided it could be that you’re getting 125 mg of algae EXTRACT (which contains 50% fucoidan), and 125 mg of powdered mushroom extract, which would mean you are getting only 62.5 mg of fucoidan per serving.

Or you could be getting 125 mg of algae EXTRACT (containing 10% fucoidan), and 125 mg of powdered mushroom extract, which would mean you’re getting only 12.5 mg of fucoidan per serving.

Either way, you just don’t have any idea how much fucoidan Umi No Shizuku Fucoidan is giving you.

Amount of fucoidan per serving = ??? mg

Back to the basics.

Fucoidan preparations in the form of whole extracts without identified marker constituents are widespread commodities. And even when it is stated on the website, as is the case with Umi No Shizuku Fucoidan, it is not mentioned in their Supplement Facts where it matters legally.

Like many fucoidan products, Umi No Shizuku Fucoidan’s Supplement Facts shows an incompletely defined marker for the fucoidan compound it claims to contain. For Umi No Shizuku Fucoidan the marker compound is completely missing where it matters most. It is difficult to know why they have chosen to omit this most vital bit of information. It could be it is because they have no valid method to present to government regulators. Or it could be a simple oversight.

So, let’s call the brown algae extract claiming to contain some fucoidan that does not disclose the level of the fucoidan content an “algae extract”.

Also, let’s leave the quantitative claim for fucoidan to highly reputed products that show actual fucoidan contents and strength measurements on the official product label and Supplement Facts panel such as Fucoidan Force™, shall we?