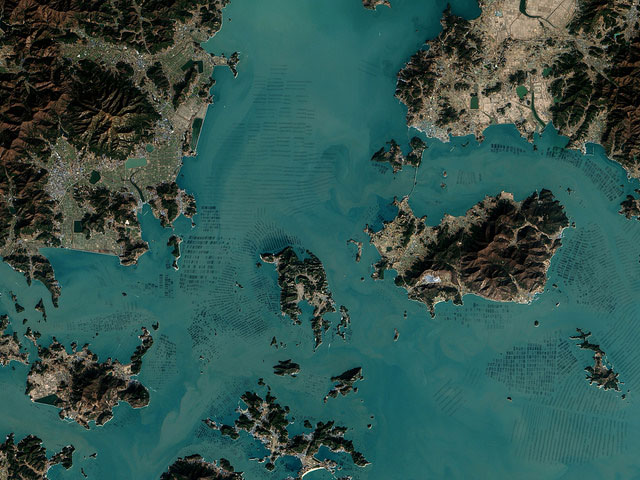 Undaria pinnatifida, also called wakame or mekabu, is a popular seaweed in Japan and East Asia used as a food and medicine. This fascinating seaweed has been cultivated since the 8th century and was used as a currency and tax in Japan due to the difficulties of harvesting it. Wakame was traditionally only eaten by the noble class or at temples during spiritual ceremonies. It was not until the 17th century that average citizens were permitted to eat wakame at their own leisure.

Despite its noble beginnings, wakame is now available around the globe.  The vast majority of wakame is cultivated in the Pacific Ocean around Japan, China, and Korea. However, this remarkable seaweed grows well in the clean waters of the Atlantic Ocean.

Because of the ongoing contamination of radioactive waste-water leaching from the Fukushima nuclear plant into fishing harbors in and around Japan, wakame and other delicate sea life may be contaminated and potentially dangerous. Conscientious consumers looking for a Fucoidan supplement that is guaranteed free from radiation should make sure the Fucoidan comes from wakame that is harvested from the pristine waters of the Atlantic Ocean.  Fucoidan Force™ uses Fucoidan derived from 100% Organic wild wakame -all sustainably hand-harvested from the Atlantic Ocean. All other sources of Fucoidan come from inferior quality and possibly contaminated seaweed. The wakame used in Fucoidan Force™ delivers Fucoidan’s renowned nutritional benefit without the toxic qualities present in bladder wrack’s bromine or hijiki’s arsenic. More importantly,  Fucoidan Force™ is clear about what its ingredients are, unlike competitors who don’t reveal the actual amount of standardized fucoidan on the Supplement Facts label.

Many companies attempt to sell their seaweed extracts by discussing the hundreds of scientific studies that have shown Fucoidan’s effectiveness. While there are thousands of studies done on the amazing effects of Fucoidan, many other Fucoidan producers fail to mention one crucial thing: that the most commonly available products have had little scientific research (hijiki; mozuku) or no research at all (“limu”) to support the effectiveness of their extracts. Only Fucoidan Force™ uses wakame seaweed that you can trust as a thoroughly tested Fucoidan source. Do not be fooled by the bogus claims of other Fucoidan sources!

Undaria Pinnatifida May Have Health and Wellness Benefits

Fucoidan’s legendary health and wellness benefits include healthy immune function, tissue maintenance, and healthy cell to cell communication. Additionally, there are more than 1400 research studies on the beneficial qualities of fucoidan on health and wellness at the National Institute of Health’s online scientific research library, PubMed.

This brown seaweed is also full of a number of vitamins and minerals including iodine, vitamins A and B1, potassium, magnesium, and calcium.

There are many downsides to most other forms of brown seaweed, but very few can be said of wakame. As with bladderwrack and most other forms of brown seaweed, wakame has lower amounts of iodine. Depending on the health circumstance some people may be negatively impacted by the iodine present in seaweed, especially those with hyperthyroidism. Always consult with your doctor before making changes to diet, medication, or supplements.

As with all brown seaweeds, a full serving of wakame contains about half a day’s worth of sodium because of its natural salty-ocean habitat. Consumers should be aware of this if they decide to consume seaweed on a regular basis. Of course, seaweed-derived Fucoidan have much less sodium than the plant itself.

Avoid Irradiated Wakame in the Pacific

Lastly, it should be known that 90% of wakame is harvested in the Pacific Ocean near the Japanese coast. This is significant because since the terrible tsunami in March 2011, the Fukushima nuclear reactor has been leaking radioactive material into the fishing harbors around Japan. All brown seaweed that is harvested in East Asian waters – which includes hijiki, kombu, and mozuku seaweeds – have been affected by radioactive waste.

The only Fucoidon on the market that is derived from safe, non-irradiated seaweed is  the Organic Atlantic-grown wakame in Fucoidan Force™.